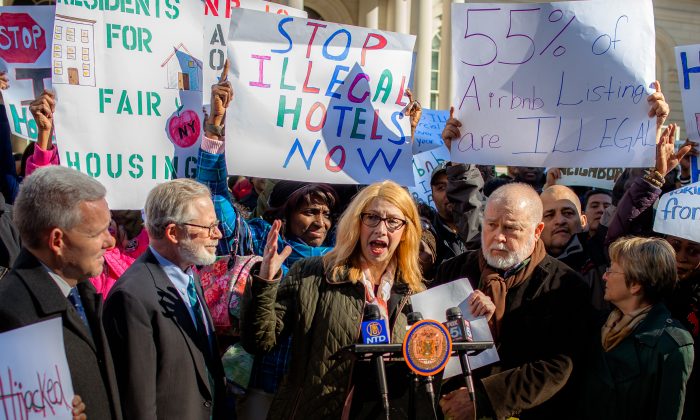 Renting out your apartment to a sub-letter for less than thirty days in New York City, if you are not also present and living there, is illegal and it has been for quite some time. In the fall of 2016, the state of New York passed a law also making it illegal to advertise for these type of sub-lets. There is nothing unique about this situation: if an activity is illegal, (think drugs, underage alcohol, prostitution, etc.), advertising that activity is also a legal no-no.

It’s more complicated for the building owners. They can be slapped with fines based on the New York State Multiple Dwellings Law. Officials can also use zoning, building, fire, or other types of code violations as well as nuisance abatement.

An organization called Inside Airbnb did a full-blown study on the issues of race and Airbnb in NYC. It was of course met with much criticism from Airbnb and the proponents of Airbnb. The report does however seem to be well researched and the critiques have been rebutted. The key findings of the report indicated:

A couple of different studies have been published in the last two years, both with the same conclusion: Airbnb is directly responsible for a drop in the availability of NYC housing units. The reports also conclude that the short-term rental site is causing a significant loss of tax revenue for the city.

Legal short-term sub-letting is essentially renting out a room to guests while you also reside at the rental location. The NY law states that you must give access to the entire rest of the home to those renters. Nonetheless, while this is not illegal in the eyes of the law, many leases and condo/coop agreements still prohibit this and may want to sign up with LeaseAbuse for monitoring Airbnb, HomeAway, VRBO and other short-term rental sites, so they are notified when any of their properties are listed, resulting in a violation of the lease agreement.